This content is part of the Essential Guide: Change Agents: Leaders in business applications
By

It might seem easy to be a "change agent" when the phrase is practically in your title and has real authority behind it. But what if the organization you're trying to change has been around for nearly 200 years?

That was Sandy Begbie's challenge when he was hired in April 2010 to be group transformation director at Standard Life plc, a Scottish insurance and investment company based in Edinburgh but with large divisions on several continents. Founded in 1825, it had accumulated a "huge head count" -- around 15,000 employees, Begbie said -- and was set in its ways. The average age of employees was in the early 40s, and 15 years was the average tenure.

"Back in 2010, Standard Life was not a customer-driven organization," he said.

Change was already in the air when Begbie arrived. Four years before, Standard Life had demutualized, transforming from a mutual (member-owned) insurance company into a publicly traded one. Now a new executive team was trying to turn the old ocean liner around and point it in a new direction geared toward serving the customer.

Ultimately, a few thousand people would be let go, including more than half of the 100 most highly compensated employees, and a leaner workforce of around 10,000 people were given new tools to align their own career development with the new business objectives.

The transformation would require reaching several objectives, according to Begbie. Projects that weren't generating profit would be killed. The company would need an integrated HR system that would be configured, not customized, and be scalable across geographic regions. HR costs would be reduced, and recruitment modernized. Manager-employee relationships would have to improve. 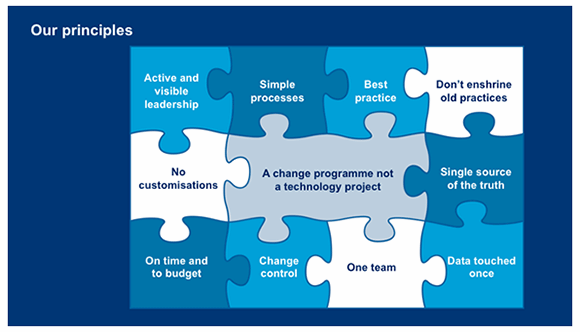 The transformation would also require a team that was "fully involved and engaged," Begbie said. "If they're not, you need to be able to deal with it and make sure they're fully engaged in the business." To keep everyone working in concert, the transformation team developed a set of 12 principles it would try to follow throughout the long process (see figure).

Begbie, who by some accounts also had the word "people" in his title, made talent management technology and processes essential to Standard Life's transformation. IT, procurement and communications were also brought under his wing.

To this herculean task he brought an impressive mix of HR, IT and business-savvy, along with clear convictions about how to prioritize the three.

"I don't have any HR qualifications, to be honest. I've always had a view that with HR you need business skills like in any other part of the organization," he said.

Making IT and HR serve the business

It's hard to tell whether Begbie's confidently stated philosophy about the ideal balance of business, IT and HR is the result of his strong resume or the cause of it. For three years before coming to Standard Life -- his modesty about HR expertise notwithstanding -- Begbie was HR director at Aegon UK, a life insurance, pension and asset management provider, having held a similar position the prior seven years at the Scottish Power utility.

In fact, Begbie's HR work has been good enough to earn plaudits. In 2009 has was voted HR director of the year by HR Network Scotland, a conference and media company, and was later honored for his outstanding contribution to Scottish HR. Standard Life's talent management program gained similar recognition the first year that Begbie led it.

Even so, the business side predominates and is the common thread running through all of Begbie's corporate roles.

"I actually started off in banking in 1983," he said, spending eight years mostly in the credit side of banks. In the mid-'90s he earned a Master of Business Administration (MBA) degree from the University of Edinburgh, and for most of the following decade was on the board of the prestigious Wharton School of Business in Philadelphia.

When he joined Standard Life in early 2010, it had an overly customized PeopleSoft system, so part of Begbie's job was to transform the human resources information system and move to Oracle E-Business Suite, a product he had implemented twice before. In nine months, using IBM as its implementation partner, Standard Life had its core HR functions on E-Business Suite. In phase two, Oracle Fusion Talent Management (a component of Oracle Fusion HCM) went live in February last year, which meant payroll, talent management and employee performance were all running in house.

Moving off the older talent management module in E-Business Suite also brought gains in usability. "The UI [user interface] was just poor" -- overly complex and requiring too many clicks, he said. In contrast, Oracle Fusion HCM "feels and looks really modern. My vision is for a single, integrated HR platform that has a simple user interface."

Begbie projects that the Oracle investment could have an internal rate of return as high as 30% over five years, in part from reduced HR labor and IT costs. "We could see 30% HR savings [next year],"he said.

But he has had to raise some issues with Oracle. "There are still bugs in the system," he said, and Oracle Support could be more responsive. "They're not always sure what's happening or why it's happening."

There's little doubt, though, that the automation enabled by the Oracle system has allowed Standard Life to reform its entire talent management process.

Fusion performance-management modules replaced the old, paper-based SMART (simple, measurable, attainable, relevant and time bound) process. Job descriptions have been standardized to help everyone understand their responsibilities, and it is easier to change goals and track progress.

"The system we have installed is dynamic," Begbie said. Employees can solicit feedback on their performance and have it submitted through the system. "You put in a performance rating and that instantly goes out to the system and is funneled to the pay matrix."

The net result is much greater visibility into the performance-review process. "It makes managers more accountable and shows employees how their performance is taken into account," Begbie said.

In March, he'll oversee completion of phase three when the company switches to the cloud-based Taleo Recruit and Taleo Learn talent management modules that Oracle acquired in 2012. He said he hopes the new system will give employees a greater sense of ownership over their careers. "We do believe Taleo Recruit is the best recruitment system in the marketplace."

HR lessons from an MBA

Another indicator of Begbie's business sense is the way he applies the budgetary scrutiny of a chief financial officer to his handling of Standard Life's HR and IT expenditures.

One way he keeps costs down is to require a business case that demonstrates how a particular software customization will advance the larger goal of serving customers. "You've really got to ask yourself why can't you live with the performance management system that comes out of the box," Begbie said.

How to keep Oracle Taleo integration on track.

Key tips to foster talent within your organization.

For example, when a Standard Life business unit asked for customizations in its Oracle Financials -- it had been on PeopleSoft financials -- Begbie put it through a business case. "The original request from the business was for 15 customizations and we got it down to four," he said.

Begbie is also clear-minded about how to maximize value from outside help, and is cautious about outsourcing anything, be it software, services or expertise.

He also feels that being the "executive owner" of the IBM and Oracle relationships helps him make sure Standard Life's IT investments serve its business needs and not the other way around.

If he has learned lessons from the Standard Life transformation, it is the importance, "from a change management point of view, [of] spending as much time as possible understanding where people are starting from. All the technology does is enable the change to happen."

Clarity and persistence are other qualities that Begbie seems to bring to the ambitious projects he is called upon to tackle. "Set your principles up first," he said. "You must be really clear about your principles and stick with them -- and avoid customizations."